Artificial Intelligence (AI) is Dr. John Flackett's passion and has been an integral part of his career via teaching, research, business and education. A leader in his field, John has 25 years' experience in AI and achieved his PhD in Artificial Intelligence (Machine Learning (ML) and Natural Language Processing (NLP)) in 2005.

John is interested in numerous aspects of AI and cognitive science, in particular, representational adequacies, Natural Language Processing, feature extraction, signal fusion & hybrid systems for applied AI. A noted international Artificial Intelligence speaker, John runs workshops and speaks at events around the world presenting key insights on AI and emerging technologies future impact on society and the workforce. As an AI advisor with contributions in government, education, industry and community, John is regularly called upon to share his perspectives and frequently contributes to media interviews, radio discussions and roundtables.

Passionate about creating environments where people can learn about AI, John's love for education came from 10 years as senior university academic teaching masters and undergraduate Artificial Intelligence and undergraduate Computer Studies and Software Engineering at a UK University. He has also worked in a wide range of industries and sectors developing commercial grade software for use in major corporations around the world (including solutions used in retail, oil and gas, education and IT.  John's received various awards, including from the British Computer Society (BCS). His academic and business career was also featured in the UK's Million Plus 'Think Modern' campaign that launched at the Palace of Westminster.

Since migrating from the UK to Australia, John has co-founded three businesses; the smart web specialist company koolth that empowers businesses with next generation online tools and delivers cutting-edge technology solutions and consultancy to a host of industries across the globe; Artificial Intelligence Laboratory (AiLab) – John’s second business venture with co-founder Emma Berry; and also the Australia AI Collective, a not-for-profit that highlights the role of AI in the country’s economic future and is committed to the development of a national AI industry.

In 2020, AiLab expanded into New Zealand with launch of a second AiLab in partnership with Auckland University of Technology (AUT); John is currently the AI Specialist in Residence and AI Ambassador for AUT as part of this exciting new partnership, whilst launching another AiLab (due to COVID-19 restrictions this is commencing virtually from June 2020).

John is also the co-founder and organiser of the popular Adelaide Artificial Intelligence Meetup (Adelaide AI) event series, which is the largest AI networking community in South Australia.In his spare time, John enjoys assisting with hackathons and social good initiatives, as well mentoring individuals and businesses in the tech community (including in underdeveloped countries). Passionate about his craft, John has helped thousands of people and businesses around the world in their AI journey and is dedicated to building AI awareness and helping everyone to develop AI skills, capability, and knowledge.

As well as his role as a senior academic teaching MSc and BSc Artificial Intelligence, BSc Computer Studies and BSc Software Engineering at the University, John was a Cisco Java Instructor. He also supervised and coordinated the final year undergraduate and postgraduate student projects and the annual end-of-year Technology Degree Show.

A Few Other Highlights

John was a judge for the Australia and New Zealand Women in AI Awards for 2021. He contributed to the book ‘The Essence of Neural Networks’ by Rob Callan and was chosen as one of the ‘Emerging Tech Inspirations for 2017’ by DevDiner readers. John was part of the team that won three awards, including the Premiers award for a government hackathon (GovHack). As well as a mentor in the AI/Tech community, John is also board advisor for start-ups and businesses. John was featured in the UK's Million Plus 'Think Modern' campaign that launched at the Palace of Westminster, where his academic and business career highlighted.

Please see the scrolling list below for a summary of some of John's keynotes, lectures and talks around the world. You can also visit the AiLab Event Journal for some of the event details. 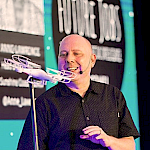