AiLab interviewed Dr Natalie Rens, the AI Specialist for the Office of the Queensland Chief Entrepreneur, founder of SpacePort AI and founder of Brisbane.AI meetup group (now Queensland.AI). We met up in Brisbane, Australia, to hear Natalie's insights and find out about her work in Artificial Intelligence and space.

This interview took place in July 2018 with Dr. John Flackett.

AiLab: Hi Natalie, thanks very much for chatting with us. Could you tell me about yourself and what your current roles are?

NR: Sure, thanks for having me. I came from Neuroscience and finished my PhD last year. I had exposure to AI during that time, but it was jumping into tech conferences where I really ramped up learning AI. When I finished my PhD I went straight into the role I am now in, which is the AI Specialist for the Office of the Queensland Chief Entrepreneur. Then very recently I founded Spaceport AI, which is developing technologies for space.

AiLab: That’s awesome! You mentioned working with AI during your PhD – so what made you delve into AI to begin with?

NR: When I was doing my PhD I began looking for things that were more applied and would make a bigger impact on the world. I started attending conferences – one of which was around emerging technology in San Diego. While I was there everyone was talking about the massive impact of Artificial Intelligence on society and how much the big companies like Google and Facebook were controlling what our near future would be – and also that most of society didn’t really have much of a say in this. It struck me during these discussions about ‘where are we going with autonomous flying vehicles?’ and ‘what are we doing with lethal weapons?’ – where humans are no longer needed – that these really massive discussions about our world were exciting, but that not enough people knew about AI. I felt I needed to get more people involved because of the potential, but also because of the risks that people needed to know about.

AiLab: Did you find that your neuroscience work helped with understanding some of the issues around AI?

NR: Not directly, although there are a lot of crossovers in the way intelligence is viewed. It was through computer science that I really started to understand more of the decision making theories from a completely different perspective than during my PhD. When I look at the way neural nets are being used now, I can see the connection from what we know about the brain; especially with the visual cortex and computer vision. I also see other possibilities and I think 'why isn’t anybody implementing this?' I wish I had more time to sit down and nut out the different hybrid models that we have spoken about to see if ideas from neuroscience can actually genuinely be applied to artificial nets.

AiLab: Great, maybe we can work together on this...

NR: Yes! As long as we can develop a time warp to get more hours in the day!

AiLab: Haha, good idea! I know that you’re really interested in applied AI – what impact do you think AI will have on businesses in the next 12-18 months?

NR: Something I’m struggling within Australia is that larger enterprise is really at a low level of maturity with understanding where AI can be applied and the general concept of being a data-driven organisation. A lot of the work that we are doing is around general comprehension in the AI space. I would like to think that in 12 months’ time we'll have organisations here that are really using AI and not just talking about it as something that they should be doing. I have a lot more faith with our incredible startups in Brisbane because they are taking on game changing ideas, like cancer diagnosis and complete business communication automation.

I’m really trying to foster that community in particular and this is part of what we are doing with building an AI Centre here as well. We’re trying to create something that is world class, so we are not constantly relying on China or America to have to adopt what they have created. [ed: since this interview, Natalie has officially announced the creation of the Queensland AI Centre.]

AiLab: Do you think the ecosystem around startups and the adoption of AI is adequately supported?

NR: I’d say that the general enthusiasm for AI is strong. We have Brisbane.AI which is a community network and with 150-200 people that come along to events and over 2,000 people in the community, the actual engagement for AI is there. The problem is the super steep learning curve from enthusiasm to applying AI in a meaningful way. That is why we want to create a strong network for people coming into the field. To have experts who can present the state-of-the-art and show how AI works, means people are not struggling for months at a time over problems and eventually give up. The bottleneck is bringing in people with expertise who can bring that tuition to the table.

AiLab: So finding and building that talent base of people is an important factor?

AiLab: Do you think Australia can be a global leader in AI? In what areas are we performing well and what could be improved?

NR: I think we're so far behind right now. We don’t have the policy in place yet and there is no way we can compete in terms of the money that other countries are pouring into AI. We honestly don’t have the culture here that really embraces this technology, unlike American companies for example. We need to go through an entire process of shifting focus and I don’t think that is a fast process. That being said, I would like to think that we can leapfrog some of the advancements that have been made, especially in things such as robotics or machinery, which Australia is strong in. We have a multi-billion dollar robotics industry and I think health is also another strong point for Australia. We have a trusted and centralised health system, which America doesn’t have. Once we have all the data in place, there is a lot of potential for Australia. Also with the space industry – I think with the opening of the space agency, we have an opportunity to really own that sector. There is a lot of space work being completed in other countries but no one has really said, ‘let’s be the country that dominates space settlement’ – so I would like us to do this!

AiLab: Your brand-new business Spaceport AI is really exciting! Can you tell me a bit more about it?

NR: I put together a proposal for an AI Centre in February and it was the same day that Starman was launched into space by SpaceX. There was something very symbolic about this and over the next few weeks Spaceport AI came together. It’s the culmination of everything I’ve ever wanted to do – the idea of exploration, the idea of the unknown, danger and pushing the extremes of what it is to be human – not for war, but for enlightenment and knowledge discovery of the entire human race. I’d never really been involved in space, as it seemed like a theoretical subject that engineers worked on, so it was just this moment of feeling I can really do something here. I researched all the companies and read frantically over the next few months and found there were lots of people working on how to develop a rocket to go to Mars – including SpaceX and Boeing – which is great! But I also looked at what work is being done in terms of keeping humans alive and building settlements; there are comments from SpaceX saying that even in a decade or so when the rockets are ready, they don’t believe other components for settlement will be. I immediately thought, ‘I can do this!’ I can bring everyone together and we can achieve so much more. Spaceport AI was founded four months to the day of Starman, so it has been a very quick turnaround, but I have so much conviction. Our mission is to enable sustainable human life in space.

NR: Yes. AI for me is one of the most powerful tools we have and I like to believe we are at the cusp here. Deep Learning obviously has issues, but I have faith in humanities ability to create better things as we progress and at the moment economics is on our side with heavy funding in AI. Space is basically the most complex edge case that we can design for, so it is really going to challenge everything that we can do. Why not couple that with the most powerful tool that we have?

AiLab: That’s interesting you mentioned issues with Deep Learning. Recently there has been increased hype around AI. What do you think we can do to combat this?

NR: It’s about education – spending time at events and speaking to people. We can still be really optimistic about the things that can be achieved with Deep Learning and I think there are a million solutions that can be applied today with what we already have. I think the most important thing that can be done to help with the hype is getting people to understand what AI is, what applications we have and what the weaknesses of these applications are.

AiLab: You’ve been in high demand since your role began in September 2017. What is your focus for the next 12 months?

NR: I’m definitely starting to focus more on the things that are directly more meaningful. I’m not going to so many enterprise engagements and I’m really asking what hard problems can be tackled and what the game changers are. I always say ‘yes’ to getting involved in education, as it’s the next generation that we definitely need to work hard for. I also have three space talks coming up and for me that is where my focus is going, so it’s very exciting.

AiLab: It is so exciting and we feel fortunate you gave up some time to chat with us. Is there anything else within AI you think we should keep an eye on?

AiLab: Is there anything else you’ve seen or heard about with regards to new approaches and/or algorithms?

NR: In neuroscience, the most predominant theory is the free-energy minimisation principle. This is a Bayesian approach and during my studies I could show voluntary decisions based on active inference. It’s interesting that there is not so much of this type of work being applied in AI. On the other side I also don’t think we have to imitate the brain, because with computers we don't have some of the same limitations; for instance processing capacity and energy demands. What we do need though is much better generalisation, so neural networks cope better in real-world situations.

AiLab: That’s a great point to end with! Thank you so much for your time and good luck with Spaceport AI.

NR: Thanks so much.

AiLab would like to thank Natalie for her time and for sharing her awesome insights.

This interview is copyright to koolth pty ltd & AiLab © 2018 and may not be reproduced in whole or part without the express permission of AiLab. 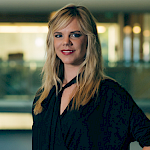 I'm a neuroscientist and artificial intelligence enthusiast. I'm passionate about the incredible ways technology can be used to advance humanity. As the AI Specialist for the Office of the Queensland Chief Entrepreneur, I work on strategies to advance AI capability in Queensland and I’m also the organiser of Brisbane.AI, a meetup with over 2,000 members. Recently, I founded my own company, Spaceport AI, with the goal of developing technologies that will enable humans to live in space. My education includes a Bachelor in Biomedical Science (honours), Master in Cellular and Molecular Neuroscience, and a PhD in Neuroscience (machine learning and computational models to predict human voluntary decisions).